Organizing a Fundraiser - Part 2, Bringing it Together


My good friend Jeni that was diagnosed with stage 2 breast cancer at 39 years old this past September is completing her last radiation treatment today!  I'm overwhelmed with joy that the toughest part is over!!

Back in February and March we held a couple of big (for us) fundraising events to help her as much as possible to pay for all the out-of-pocket expenses she faces so she could focus on getting through treatment and getting healthy.  I learned so much about organizing a fundraiser for an individual's medical expenses, and there wasn't one great source for all the information I gathered, so I thought I'd share some thoughts to hopefully help others in this endeavor.

Part 1, Getting Started was posted before the main event.  At that time, I had really learned a lot, but since the events are behind us now I am better able to really give some advice.  In this second post about Organizing a Fundraiser, I will describe how to bring all the planning together to execute a successful event, as well as make a few comments on things that worked well, and things that could have been better. You can read about our fundraiser specifically at helptheharrisfamily.blogspot.com.

We focused on one main event, a "Pizza Fun Night" at a local Round Table Pizza (more on this in a moment).  We had a raffle, a silent auction, and a bake sale AT the event as well, which were all put together from donations from friends and family and the community.  This is where we left off last time, so we'll start with tips on asking for help from the community.

We put together a template letter that, on one page, gave a little back story about our friend and what she was going through, and then requested any donation the business could make, and indicated that we would put their logo or business name on as many marketing materials as we could.  We included the logo seen above for our fundraiser (part of our "branding" strategy that I discussed in the first post), as well as logos for all the businesses that had already donated something (nothing wrong with a little peer pressure!).

We divided the target businesses among three committee members (we each did about twenty letters or so).  If we didn't know, we contacted the business to find out who would be responsible for making a decision about a fundraiser donation.  Then we addressed each letter directly to that person.  Each of us included our own contact information on the letters we distributed (so that each business had one go-to person).  We specified in each letter a specific date on which we would follow up.

We mailed a few letters, but personally delivered most of them.  We started with businesses to which someone in our planning group had a personal connection (other folks helping with the event also reached out to their connections), then we branched out to major names (large and small) in our community.  I was BLOWN AWAY at the response and support we got! We ended up with over seventy raffle prizes, and over twenty items for the silent auction!

Raffle AND Silent Auction  We decided to do both a raffle and silent auction when we started receiving some donations that were pretty specific in terms of who might be excited to receive the item.  For example, we got a full 1 year membership to a specific location of Curves donated (soooo awesome!), but the winner would have to be a female that is able to go to that location, so we thought that would be a perfect silent auction item, but not so great for a raffle.  And we divided all the donations between the raffle and auction with similar criteria.

You are NOT Alone  It became extremely clear that there are TONS of fundraisers for many different causes going on at any one time.  The bigger the business's name, the more requests for donations it receives.   Constantly.  I had been told that large companies and chains (with deeper pockets) would be more apt to donate for our raffle.  I found the EXACT OPPOSITE to be true.  We got a few donations from major chains, almost exclusively when someone in the group had a significant connection at the business.  BUT, a lot of this may have had to do with the timing of our event.  We planned and executed our event from start to finish within about 7 weeks.  A few of the chains let us know that they have committees that meet and discuss donations at certain times.  For Costco, we might have gotten something had we approached them at least 90 days in advance.  Target and a few others meet every six months to consider donations.  Best Buy and a few others meet monthly.  If donations from these types of stores are important to you, it will need to affect your timeline.  But we found small, local businesses to be very generous.

A BIG Donation really helps  A friend that was involved in planning the events donated his timeshare, a week-long stay at a Beach Resort villa in Cabo San Lucas, worth over $2000!  As you can imagine, this prize had a major impact on our raffle ticket sales, and created quite a buzz with folks at the event and on Facebook.  Especially because I could post photos like the one below from the resort!

We sold raffle tickets in advance and at the event.  They were $2 each or 3 for $5.  We sold more than I expected in advance (the most successful were those of us that work at places with lots of people around), but we sold even more at the event with the buzz about Cabo, and the raffle was the most significant part of the money we raised, by several fold.

Silent Auction: Beyond the Event  We decided to post the items for our silent auction on Facebook and start the auction on Facebook a few days in advance of the event, and to continue the auction during the event both live at Round Table Pizza and on Facebook, for those from out-of-town or that couldn't make it down.  I photographed each item and edited a "card" with the image and information on each item to upload as a single photo to Facebook.  Then people made bids via commenting on the photo.  We sold at least half of the items via Facebook.  It was a bit tricky for me during the last few minutes of bidding, but the timestamps of comments posted on Facebook helped.  I definitely recommend verifying that your event location has a WiFi connection you can use prior to doing something like this.

Flyers I created flyers with my image editing software that included our branding, and information about the event and all of its activities, as well as kudos to all of our sponsors and other ways to make donations.  We posted this flyer at as many businesses around town as we were able. 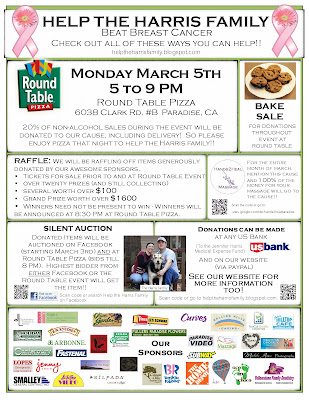 Social Media  As I mentioned in the first post, I created a blog and Facebook page for the Help the Harris Family fundraiser.  We shared updates on events and how Jeni was doing via these media.  Everyone connected with the fundraiser shared update posts about the event, the raffle prizes, the silent auction items constantly in the week or so leading up to the event to spread the word.

Newspaper   We submitted a press release to the local newspapers.  The press release was a concise version of the back story and event information adapted from the letter we gave to businesses, along with a headline.  We followed up to make sure the local paper would run a story or ad about our event.  They listed our event in their community events section, and they also had a reporter write a story about the event.  It was a large story and included a version of the flyer - so awesome!!  I know that some people were at the event, and tuned into the silent auction on Facebook, because of this promotion specifically.

Radio   Two different people in the greater planning group had contacts in the radio world in our area, so we sent our press release out via those people, but we didn't really follow-up directly and I regretted this in the last few days before the event.  I have no idea if we were ever mentioned on any radio stations...  So I would recommend arranging an introduction, instead of completely delegating something like this, so you maintain the ability to follow-up, because follow-up was really key in everything we did.

Television   In our community, there is one news station that features community groups on the air to promote events, so we submitted our press release and contacted them several times.  We were able to list our event on their community events website, but the TV spots seemed to go by a lottery system (or if you knew someone probably), so we never made it on the air.


The Event was a HUGE Success!

The Pizza Fun Night was an amazing success.   Due to our promotions, we had that restaurant busting at the seams for a full 2 hours of our 4 hour window.  It was amazing.  They were calling in all available employees, and I heard it was the restaurant's busiest Monday night ever!

We were able to help with a small but significant chunk of the Harris Family's medical expenses, and I know that was huge for them.  Jeni's family also planned two events (a pancake breakfast and raffle) at the Moose Lodge in her hometown, and as I understand it, those were pretty successful too!

While I wish we could have raised all the money they needed, I know that every dollar we raised is a about 75 cents they don't have to worry about (after taxes), and I am SO glad we did it, because they certainly deserve all the help!!!


A Note about the Round Table Pizza Fundraiser Program

We were definitely grateful to be able to work on all the above parts of the event, rather than worry about venue and food planning, so we have no regrets about hosting the event at Round Table Pizza.  However, we didn't find out until the day of the event that folks using coupons would have a direct impact on the portion of sales we received.  For example, we were set to get 20% of the proceeds from all non-alcohol sales.  So if someone bought a pizza for $10, we would get $2.  But what we didn't know in advance, was that if that same person used a $2-off coupon, we would get nothing from that sale.  I strongly advise that if you take advantage of a fundraising program at a restaurant like we did, that you ask specifically in advance how coupons will affect you.  Had we known, we might have been able to at least put a message out on Facebook for everyone we knew to let them know that they should save their coupons, if they were able.

All-in-all, the money we raised from Round Table was tiny in comparison with the other events we held there.  We were surprised when we heard the final amount, given how ridiculously busy they were (people were waiting close to two hours for their food at one point) that we had raised so little, and they said there were a lot of coupons used.   But I reiterate that we really wouldn't have gone any other way (except maybe to see if the other local restaurants that had similar programs might not have had this coupon rule).

This post is linked up to the following link parties: