We are having an impromptu gathering to watch the Opening Ceremonies for the Summer Olympics tonight.  I wanted a traditional British meal that would fit with our South Beach diet.  Cooking Light magazine has a selection of lightened up traditional British recipes, but none of them is exactly low carb.  But with a few modifications, I'll be making low carb Shepherd's Pie and I think it should be super yummy!


The Cooking Light Shepherd's Pie recipe uses packaged mashed potatoes and a little added sugar in the ground beef mixture.  For my version, I will prepare mashed cauliflower, and omit the added sugar.

Steam one bunch of cauliflower (about 45 minutes or until desired doneness).  Puree cauliflower with approximately 1/4 cup of softened butter or butter substitute.   Add half and half or skim milk gradually until you get your desired consistency (probably about 2-4 Tbsp.).  Salt and pepper to taste.

Then I'll follow the Cooking Light recipe below, but use the cauliflower mash instead of potatoes and omit the sugar.

Note: Prepared mashed potatoes are found in the refrigerated section of larger grocers. They only need a few minutes in the microwave to reheat.

Here is how our version turned out, paired with sauteed green beans. 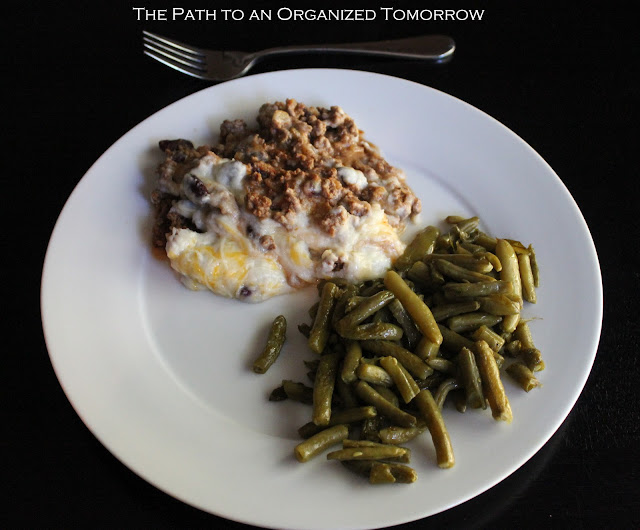