When I found this super cute paper on sale at Michaels, the cupcake theme for my daughter Zoe's first birthday party was set!  I also picked up some glittery silver paper and glitter paints to coordinate.  :) 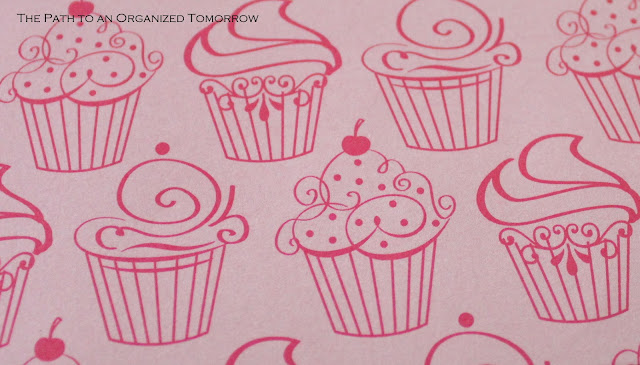 I borrowed the Sweet Treats Cricut cartridge from my awesome sister-in-law to put the invitations together and had my older daughter Alyssa help me paint the cupcake and candle with glitter paint. I wrapped some glittery pink ribbon around the cupcake wrapper to give it some dimension and texture. 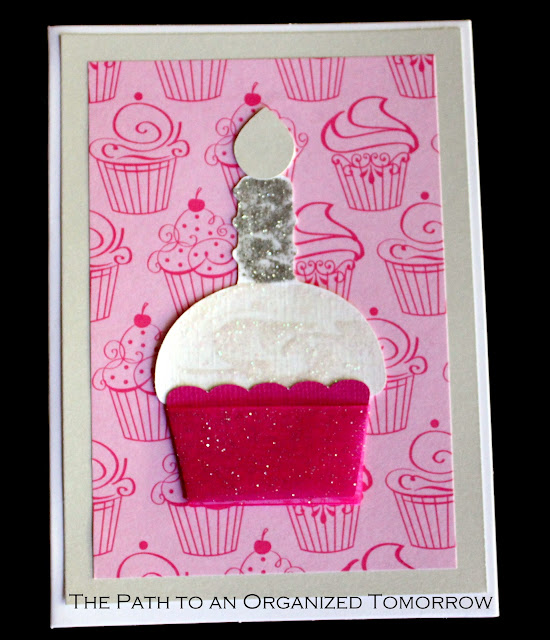 We had Alyssa's first birthday party at our house, and from that party we learned that our house and yard are just a little too small to have a gathering of more than just a few friends for now.  But our budget didn't allow us to rent a big space or even do something at an activity center (such as a gym, bowling alley, or roller skating rink).  Since the weather is pretty nice around both girls' birthdays (end of May and early September), we luck out and are able to go to a park for our parties.  I'm such a planner that I just have to have a reservation for a party, rather than scoping out a set of picnic benches at the park the day of the party, especially in early June!  I called around to the recreation departments in the area and was surprised to find the local parks in Paradise now charge a fee between $50 and $150 dollars to rent BBQ/party spaces!  Luckily, the super-fun Caper Acres park in Chico still allows reservations in their "birthday rings" for free.  Whew!!  With play equipment for kids of all ages, the only challenge was keeping them together for the party activities.  :)

I'm not huge on party decorations anyway, so it wasn't very hard to avoid buying balloons and streamers to keep costs at a minimum, but when it comes to tablecloths at a park, those are a must!  A friend gave me an awesome tip that the newspaper here in Paradise, which also prints publications for many surrounding areas sells the "ends" of the large newspaper rolls, which still have TONS of paper left, for super cheap ($1.50 per roll!).  We picked some of these up to use now and for many (many, many) art projects to come, taped them to the tables, and put some crayons out for everyone to draw all over them during the party - it was great! 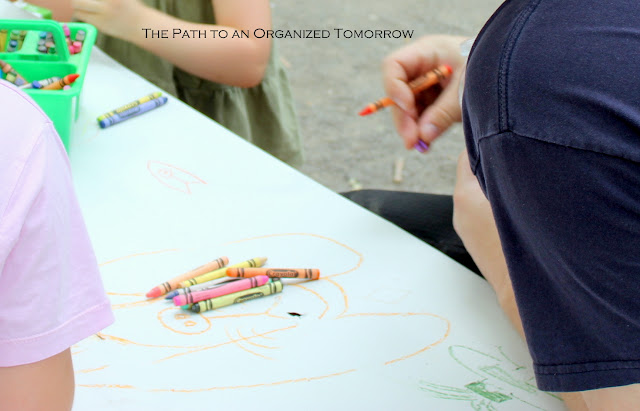 And the remaining roll was perfect to give us a clean place to set all of our stuff instead of taking up real estate on a table or sitting on the dirt at the park! 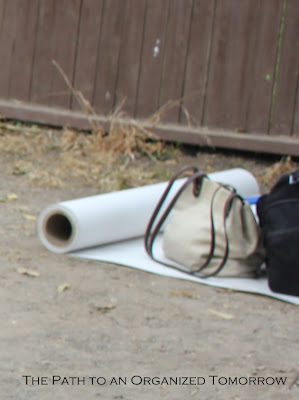 I made chocolate and yellow cake cupcakes and three different kinds of frosting, pink vanilla, chocolate and Nutella frosting from Pinterest (it is as yummy as it sounds!).  Since Zoe has a cousin with a nut allergy, I made a double batch of chocolate frosting following the Nutella frosting recipe, but omitting the Nutella.  Then I split the batch in half and added Nutella to one batch, and kept some plain chocolate.  Both were awesome!  A side note: I added all the ingredients together and mixed with the hand mixer instead of mixing things together in stages (since I failed to read the directions on the recipe ahead of time - whoops!), and the frosting turned out just great. 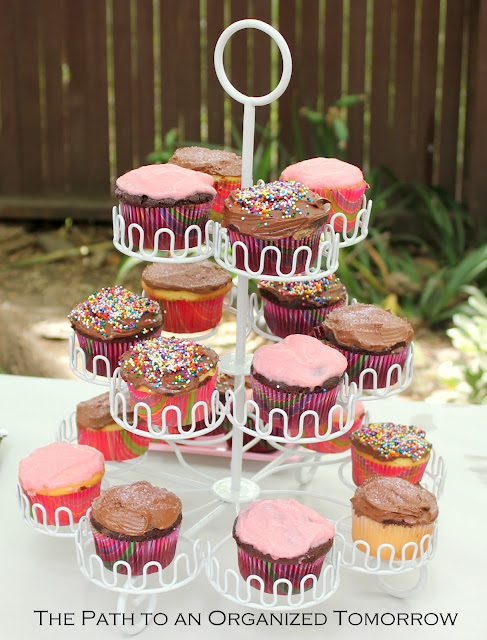 Since we didn't play any games (not necessary at the park!), I set up a cupcake decorating station for the kids.  I made a set of each kind of cupcake in my mini-muffin pans, and set out the pink vanilla and chocolate frosting and sprinkles and let the kids decorate their own cupcakes.  The "do-it-yourself" cupcakes were a hit with the kids!  One lesson learned: I put out "cookie sticks" from JoAnn to use to pick up and dip the mini-cupcakes, but the cupcakes ended up falling off of them easily and forks worked better... perhaps a thinner stick next time? 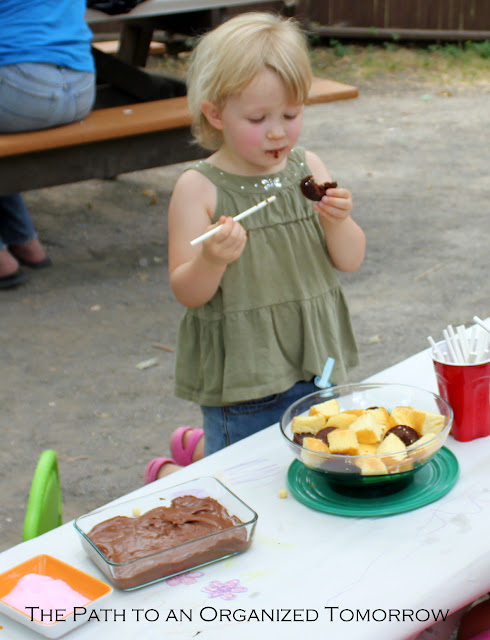 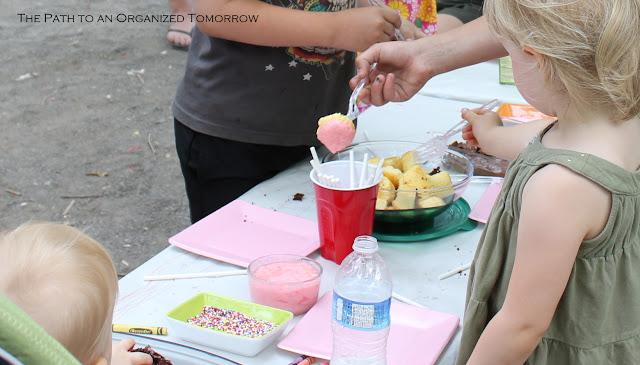 The birthday girl even had a super-sweet cupcake dress to wear for the party (thanks, Grandma!).  I'd say the party was a great success!! 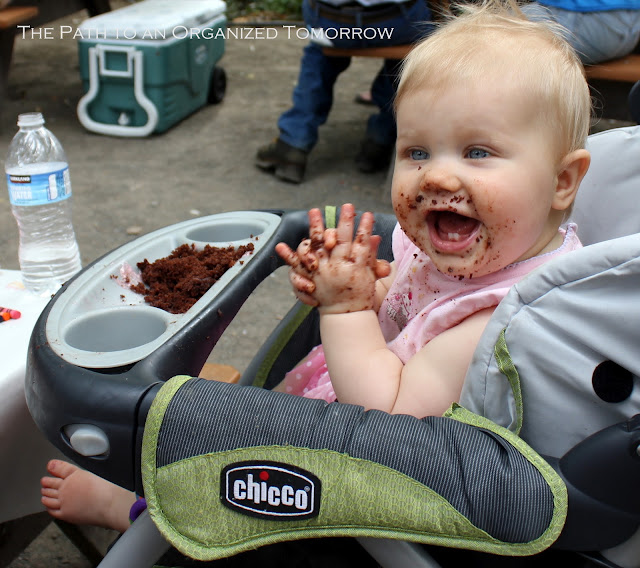 I had enough paper leftover from the invitations to make these coordinating thank you cards too! 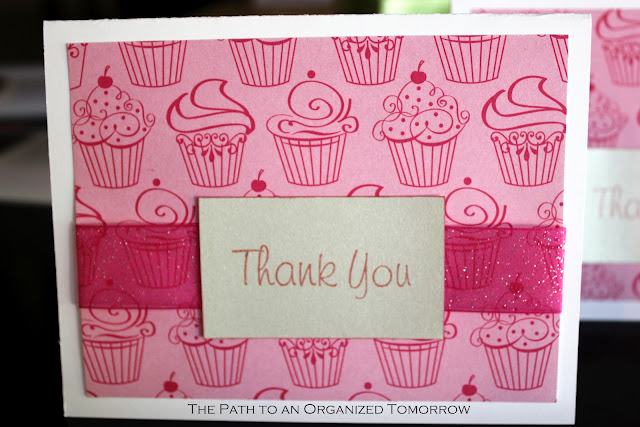 What are your secrets for planning a cute and fun birthday party on a dime?

This post is linked up to the following parties: