Welcome to the latest column of my blog entitled 5 Answers.  Although it seems like a departure from my blog about all things organization, its purpose is to organize the buzz and the facts available on a topic into a succinct summary.

I will research topics from current events and pop culture and post a concise article that provides the answers to 5 pertinent questions on the topic.  Please feel free to request 5 Answers posts on topics about which you are interested to know more.  Most likely others will be interested as well!

On October 4, 2011, California signed into law the Toxin-Free Infants and Toddlers Act.  Effective July 1, 2013, the use of BPA will be banned from the manufacture and sale of infant bottles and sippy cups in California.  I have been wary of BPA since my oldest daughter was born, but I haven’t really researched the subject.

1.  What is BPA?  BPA, or bisphenol A, is an ingredient in many plastic household items, canned goods, and electronics.

2.  Where is BPA found?  BPA can be found in polycarbonate plastic, epoxy resins and thermal paper (such as credit card receipts).  BPA is also used to make some types of PVC.

Polycarbonate (PC) plastics should be marked with the recycling symbol 7, which is the catch-all or “other” category of plastics.  There may also be a small ‘PC’ mark near the recycling symbol.  PC plastics are clear; if the plastic is opaque, it is probably not PC.  PC plastics are widely used in infant bottles, water bottles, tableware, and plastic toys.  In a Harvard study, BPA levels measured an average of 69% higher after drinking water from polycarbonate plastic bottles compared with stainless steel bottles.1

3.  What are the effects of BPA exposure? BPA belongs to a class of chemicals called endocrine disruptors.  BPA looks like estrogen, so it mimics the actions of estrogen in the body, but it is more problematic because it isn't actually estrogen.

BPA-exposure is difficult for scientists to study in humans, because we are all exposed to it.  In a CDC study, BPA was detected in the urine of 93% of 2,517 participants tested!2

4.  How much BPA exposure can we get from canned goods?  As shown in the following figure, analysis of BPA testing shows that 1 in 10 cans of food (any kind) and 1 in 3 cans of infant formula exceeds the government’s current safety threshold for BPA exposure (and were within a factor of 5 of the dose known to be toxic).3 Acidic or fatty canned foods such as tomatoes and beans are likely to contain more leached BPA.2 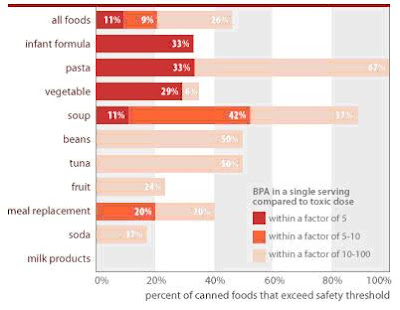 Recent research has suggested that the current safety threshold may even need to be lowered to prevent harmful effects listed in the previous section.4,5  In response to this concern, government agencies are sponsoring millions of dollars of research into the effects of BPA.

5.  How can we avoid BPA exposure?  Many food containers and plastics for children are marked BPA-free.  If the plastic has a recycling code, avoid type 7 (especially if also marked ‘PC’) and type 3 (PVC).  Recycle any plastic baby bottles or other food containers if they are scratched, as it becomes easier for chemicals to leach out when scratched.  Also avoid microwaving food in plastic containers.

Opt for fresh or frozen fruits and vegetables instead of canned ones.  Many soups are available in cardboard packaging.  Eden Organic makes canned beans in BPA-free cans and tomatoes and tomato sauces in glass jars.  Use powdered infant formula instead of liquid if breastfeeding doesn’t work for you.

Use reusable stainless steel containers for on-the-go water instead of plastic water bottles (unless they are marked BPA-free).  And always opt for reusable instead of disposable containers.

Please comment with your thoughts on BPA and other ideas for how to avoid BPA.